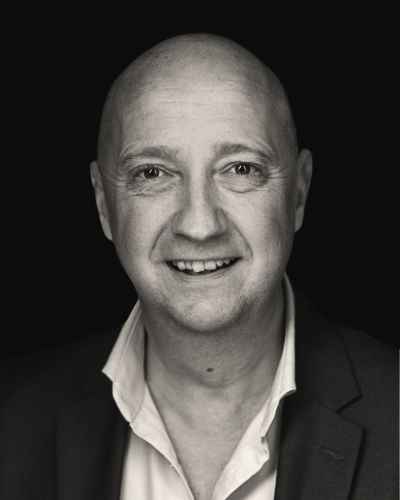 Scott trained at Mountview theatre school where he studied Acting and Musical theatre. As an actor, Scott performed in London, at amazing theatres like the open air theatre in Regents Park and the London Lyric Hammersmith. Scott moved to Yorkshire over 20 years ago, to work with a national touring company, CragRats. Whilst there he directed a multimillion-pound, two year theatre project, that toured the UK and reached over 1 million young children.
It was during this time that Scott honed his skills in writing and directing for a family audience. Scott was able to draw on his knowledge and expertise in pantomime, having worked on so many shows over years. Added to which, he had played most of the characters, from Buttons, to Villain, to Dame.
Scott has also directed numerous pantomimes at some of the most prestigious theatres in the UK, including the world-famous LEEDS CITY VARIETIES, The GEORGIAN THEATRE ROYAL, Richmond, The FORUM THEATRE, Billingham, The LOWRY, Manchester, The PRINCE OF WALES THEATRE, Cannock, The MUNICIPLE HALL, Colne, The LAWRENCE BATLEY THEATRE, Huddersfield, The LIBRARY THEATRE, Darwen, The MILL THEATRE, Holmfirth, and the KING GEORGES HALL, in BLACKBURN. As a result of his passion for performing and directing in theatre, Panto Ever After was formed.
As well as directing the shows for Panto Ever After, he also directs for other national touring companies. Namely, Heartbreak Productions, where he recently directed their national UK tour of Gangsta Granny by David Walliams.
The reason why Scott enjoys directing pantomime is simple.
“Directing pantomime is a pleasure anyway. Yes, it can be challenging at times, but you are always having fun. Being creative, and producing a show that will put a smile on someone’s face, and hopefully make them laugh, is what it’s all about. Our unique traverse style of pantomime, gives a chance for our audience to experience live theatre in an even more enjoyable way. They are closer to all the characters. They see the whites of an actor’s eyes up close, and actually feel like they are on stage with them, immersed in the action. It is an exhilarating, exciting and adrenaline pumping experience for both the audience and the actors. Which is why it can feel totally liberating for the actor, but also incredibly intimate for the audience. Everyone leaves feeling like they have just been involved in something very special. Which for a younger member of the audience, who is watching theatre for the first time, is an incredibly memorable experience.”

Collaborate with Panto Ever After

If you are looking for a fresh, dynamic company to work with to produce your family entertainment, we would love to hear from you to see how we can work together.

Please fill in the areas below, and we will contact you to talk through all options for your venue.